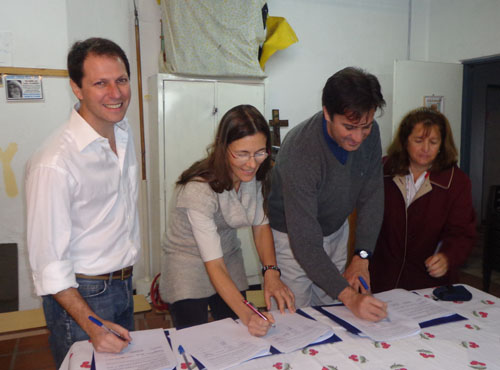 Foundation for Community Development San Andrés (Quinta San Andrés) is at the service of the maternal and child population in order to help them to achieve a higher quality of life. It gives answers to their specific needs through the articulation of resources and capacities, always in the encounter with the other. Its actions are focused in the area of San Fernando.

In Argentina, the percentage of children with global delay of development at the age of 2 to 5 years is 20% to 39% as revealed in various studies published in 2007 and 2010. The areas facing major difficulties are the language and the adaptations in the socialization, according to Dr. Lejarraga studies.

In the population there is 20 to 39% percentage of children with global developmental delay at the age of 2 to 5 years. Global developmental delay in the child is defined as those presenting two or more areas, either cognitive or adaptive below two standard deviations, according to publications in our country (Dr Lejarraga; Dr Gessell 2005, 2010). The most committed areas are: the language area and the area of adaptations in socialization.

In hospitals, professionals take in children who start primary school with difficulties in reading and writing. The common variable among all of them was investigated and it was concluded that the majority were derived by their kindergarten teachers to the speech therapist when they attended the 4-year-old classroom. According to this recommendation, parents attend the health system applying for treatment, but the system is historically collapsed. The child returns to the kindergarten without the possibility of a treatment and over the years he keeps adding difficulties because he has not been able to adequately solve his first cognitive process.

Alimentaris partnered with “Fundación Quinta San Andrés” and “Estrella de Belén” kindergarten (dependent on the Ntra. Sra. de Itatí Parish), to develop an integral project based on the work carried out by Dr. Clara Glomba and her team, oriented towards the realization of speech and psychological treatments in the kindergarten. The educational institution was chosen for the realization of the project, since it represents the reference place for the families. The inclusion of speech therapists for the implementation of treatments in mild cases, contributes to release the health system, so that is able to respond to the most difficult cases that require more complex strategies. 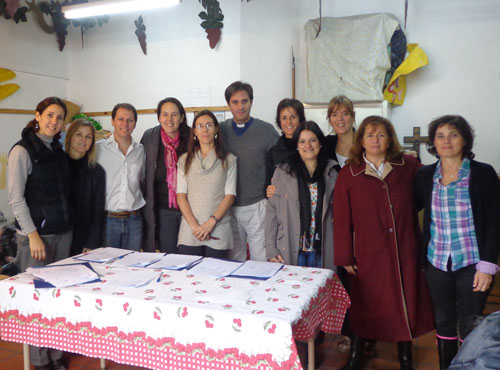 This project added the need to make mothers be aware of the importance of playing a role as generators of communication between their children and about the use of communication as a tool of life within the family. In this way, a change of social paradigm is generated in the community by positioning the mothers as therapy assistants. All of this has impacts on daily life, giving new value to mothers, and allowing children to reach first grade with better language tools, better developmental conditions and more secure cognitive functions.

Identification and training of mothers as multiplier agents, to spread new patterns of interaction with their children and promote their healthy development, was a key link in this project, as well as to train the educational institution to incorporate neuropsychological strategies in order to facilitate the children learning.

The kindergarten wherein the project was developed is located in San Jorge neighbourhood, a disadvantaged area of San Fernando. To achieve all the objectives, the project included the accompaniment of 50 4-year-old children – from Estrella de Belén Kindergarten, for a 2 years period, developing actions in 3 levels:

This work was carried out by a team of professionals coordinated by Dr Clara Glomba, children neurologist, and Fundación Quinta San Andrés who accompanied the whole process and collaborated in the experience systematizing so that it can be replicated in other institutions.

The methodology used during the project is described below:

The realization of this project demonstrated that working with children from an early age and engaging parents to change the paradigm in their children’s upbringing and in the communication with them, the development deviations are greatly diminished, strengthening the areas of language, graphics and socialization. The kindergarten was the ideal setting for carrying out the activities, as it strengthened parents’ confidence in the school authorities, empowered teachers with new psycho-pedagogical practices and increased the frequency of interventions in children by different professionals.

Back to Child Development Programs